Sanderstead is a village in the London Borough of Croydon, situated on high ground at the edge of the built-up area of Greater London.  From 1915 to 1965 it formed a parish in the Coulsdon and Purley Urban District of Surrey. Having been a farming community in previous centuries, Sanderstead is now essentially a dormitory village for commuters to central London and Croydon.  The Grade 1 Listed All Saints’ Church dates from the 13th century but was extensively altered in later periods. Sanderstead station is lower down the hill and has trains to East Croydon and central London, and to East Grinstead and Uckfield.

There is evidence of prehistoric human activity in and around Sanderstead.  In 1958–60 the Sanderstead Archaeological Group excavated in the vicinity of Sanderstead pond and revealed the presence of man as far back as the Mesolithic Period nearly 12,000 years ago, as well as pottery fragments dated between 100 AD and 1300 AD and a bronze belt from the end of the Saxon era. North of the village at Croham Hurst, upon a wooded hill, are circular barrows believed to be from a Bronze Age settlement. This is now part of a public open space and the site is marked by a brass monument.  A Romano-British homestead (small farming settlement) was discovered during the construction of the Atwood School.  During the 1980s, when the school was extended, further excavation revealed the remains of several round huts, hearths, a brooch, and pottery, some of which hailed from North Africa.

An Anglo-Saxon reference to Sanderstead can be found in the will, dated 871, of Alfred, an ealdorman.  The village lay within the Anglo-Saxon administrative division of Wallington hundred. It later appears to have been given to St Peter’s Abbey, Winchester (Hyde Abbey) by Æthelflæd, the wife of Edgar the Peaceful and mother of Edward the Martyr, where it remained after the Norman Conquest.

Sanderstead appears in the Domesday Book of 1086 as Sandestede, and belonging to St Peter’s Abbey, Winchester.  It had a total household population of 26 including 21 villagers, 4 slaves and 1 cottager. Its Domesday assets were assessed as 5 hides, and 10 carucates of arable land. It had 9 ploughs and wood worth 30 hogs. Its Domesday entry records that in the time of Edward the Confessor it was valued at 100 shillings, and now 12 pounds; and yet it produces 15 pounds.

The village was granted to Sir John Gresham by Henry VIII following the Dissolution of the Monasteries. It was passed to his son Richard who subsequently sold it to John Ownsted, the transfer being ratified in 1591.  Ownsted died without issue in 1600, and devised his estates to his two sisters and cousin Harman Atwood, with Atwood subsequently purchasing the shares of his joint legatees.  The Atwood family had a long association with Sanderstead, with inscriptions at the local church indicating a presence in the village from the reign of Edward II.

On Monday, 6 September 1731, the nearby Sanderstead Common was the venue for an important cricket match between Surrey and Thomas Chambers’ XI, Surrey winning the match by an unknown margin. On Monday, 26 June 1732, Surrey played London on the common. This match was drawn.

The manor house, known as Sanderstead Court, was substantially remodelled by Harman Atwood. This large country house was probably first constructed in the early sixteenth century. The Atwoods continued to occupy the house until 1778, when it was devised to Atwood Wigsell. It was turned into a hotel in 1928, and before the Second World War it was used by the Royal Air Force (RAF). It was very badly damaged by fire (not a bomb) in 1944 and was demolished in 1958. One very small part of the hotel building does however still stand. On the site now stands “Sanderstead Court”, a three-storey block of flats.

One of the more curious aspects of Sanderstead is that it has no pub, unlike nearby Warlingham which has around six. The reason for this is that some time ago, both the Atwood family (the Lords of the Manor) and the Rector of the church were against drinking.  At the British Library there is a letter from the rector writing to both the parishes of Sanderstead and Warlingham (which lies to the south of the village) calling the latter “sinners” as they visited the pubs.

On the edge of the village lies the site of the Old Saw Mill, now home to a number of private residences and the picturesque setting for Sanderstead Cricket Club. Cricket has been played here since 1883 and continues to the present day with four teams playing in the Surrey Championship and a number of other Colts and friendly teams.

Located between Limpsfield Road and Kingswood Lane is the large Kings Wood.  It derives its name from a small wood to the north of Kings Wood Lodge.  In 1823, Ordnance Survey Maps called the wood Sanderstead Wood, but this might be due to a mistake.  It covers some 147½ acres, criss-crossed by ancient rides and is on relatively flat ground.  It was purchased in 1937 under the Green Belt Act by the local council and is now public open space. There is the site of a Romano-British settlement on the northern boundary, a small farmstead undisturbed for 2000 years.

The 1944 Education Act provided secondary education for all children, but it took some time before the new facilities were available in Sanderstead.  The campaign by local organisations to demand better educational facilities, which had been suspended during the war, was resumed.  An Education Campaign Council was formed in 1946, supported by the Residents’ Association of Sanderstead, Selsdon and Riddlesdown, the Sanderstead Women’s Institute, the Sanderstead Housing League, the Sanderstead Communist Party, the Sanderstead Liberal Party, and the Labour and Conservative Parties of Sanderstead and Selsdon. Their objectives were very similar to those of the pre-war campaign:

The Education Campaign Council continued to operate until 1955, although the political parties had withdrawn their membership at an earlier date to enable the campaign to be non-political.

The campaign bore some fruit. In 1949 a primary school was opened in Tithepit Shaw Lane in Hamsey Green, and in January 1958 Riddlesdown School was opened as a mixed secondary modern school, on a site that had been purchased in the 1930s.  In 1969 Riddlesdown School was converted to a comprehensive school, catering for students aged 11 to 16, and in 1996 it introduced a sixth form, taking the age range up to 18.

The 1950s and 60s were a time of growth.  Ridgeway School opened in February 1958 as a combined Infants’ and Junior School.

Atwood County Primary School was opened on Monday 13th June 1960.  However, Atwood is built upon a much older settlement and so it is likely that children have been ‘educated’ hereabouts for thousands of years.

Archaeologists discovered that Atwood was once the site of an Iron Age village, from around 2600 to 1800 years ago.  The people abandoned it in the middle of the Roman occupation, perhaps preferring life in the new Romano-British settlements in Croydon or Purley.

During archaeological excavations much pottery was found which was made locally but some, known as Samian ware, was imported from Gaul – what is now France.  Lots of flakes of flint were also dug up, used to cut up food and for other tasks.  Some shards are on display in the Junior Corridor and a Roman brooch from below the infant wing is kept at the Museum of London.

Atwood information from the Croydon archives

To date, there have been 9 Head Teachers here at Atwood.

Details from the very early days of Atwood from Croydon Archives:

On the first day there were eleven children on roll.  There are no facilities for cooking school meals on the premises – these are sent from Warlingham Central Kitchen. The children admitted to the school are all infants’.

Friday 8th July 1960.  ‘Miss. Newton, Canteen Supervisor, called to find out how many children would be staying to school dinners next term’

Friday 16th December 1960.  ‘We had a school closure in order to prepare the classrooms for the school party. The school was opened at 3 o’clock. Miss Parris came to the school party and so did several managers, namely Mr Nicholls, Mr and Mrs Goddard and The Rev Harvey sent a representative. It was a very successful party, thanks to the co-operation of the parents’

November 1st 1961.  ‘Mr Davies, Headmaster of Selsdon Secondary School, has been appointed Headmaster of the Atwood School. If the new building is ready it is anticipated that Mr Davies will take up his new appointment in January 1962′

November 16th 1961.  ‘Mr Maw and a deputation of six men came from the County Hall to inspect the building of the new school to see if it would be ready for opening. The conclusion was it would not be ready. In view of this the Acting Headmistress suggested that the staffroom should be used in January and converted into another classroom to accommodate the January intake. The suggestion was accepted’

September 4th 1962.  ‘School was due to be reopened today, but the children have been informed that the new school will not be ready for them until Monday as all equipment was removed during the summer holidays, all the equipment, furniture etc being placed in the new building now’ 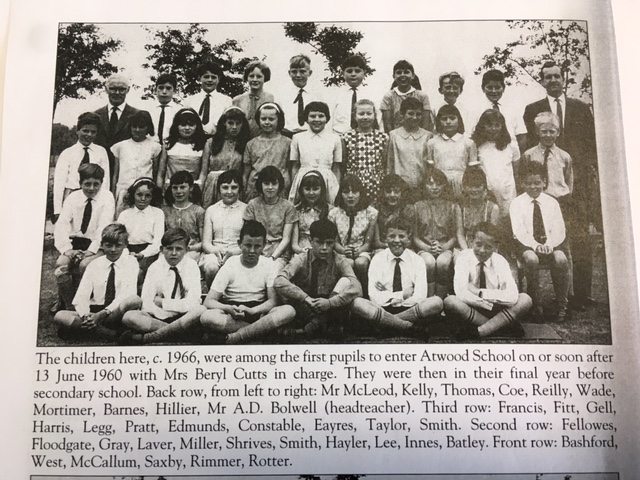 Do you recognise anyone here? 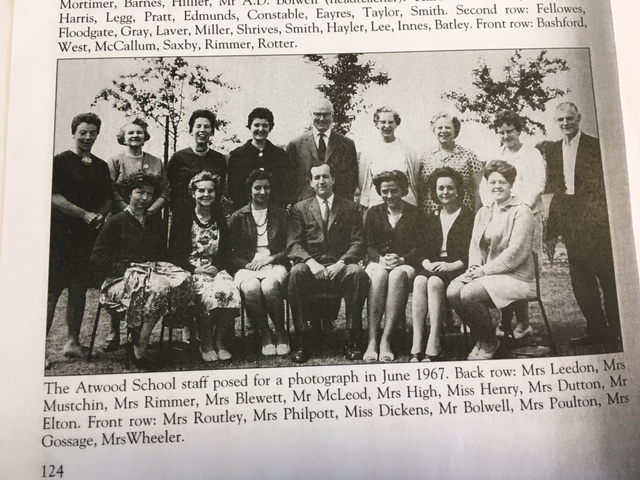 More teachers from Atwood’s past. 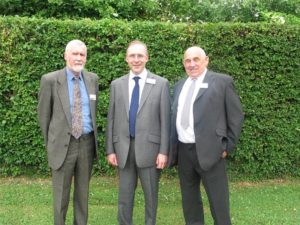 What is the collective noun for Headteachers?